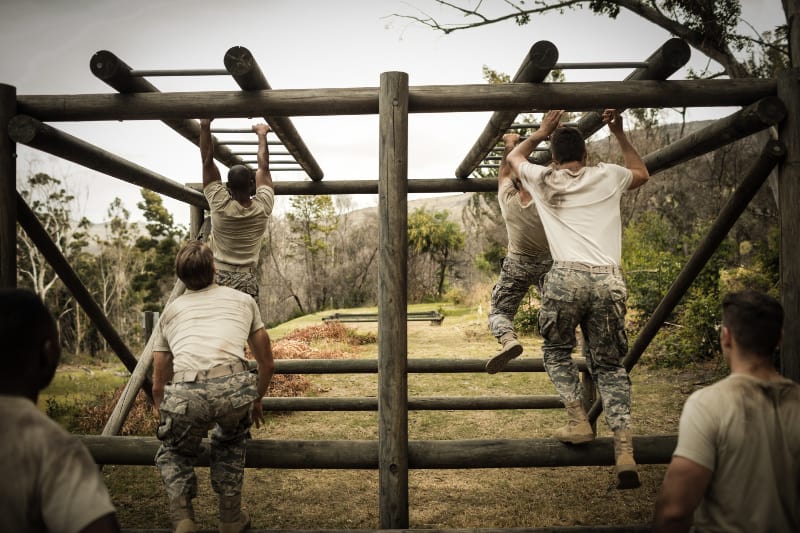 Despite the amount of controversy that has sprung up around them, juvenile boot camps better known as teen boot camps have little trouble in maintaining their appeal in the private sector. It’s no surprise really, because “getting tough on crime” while rehabilitating juvenile offenders into prim and proper young adults will always have an intuitive appeal to the public.

Due to controversy, there has been a new critical scrutiny into the whole juvenile boot camp concept. Many experts have claimed that teen boot camps have poor evidence showing that it reduces recidivism on its participating youths, thus defeating its purpose as a proper intervention. According to them, the positive changes demonstrated while in a youth boot camp program do not usually last once a troubled youth returns to his community.

So what does really work in these short term, high impact military style boot camps? Are they still a viable option for helping troubled teen and at risk youth regain control of their lives?

According to a study conducted by a number of researchers in 2001, teen boot camps still have certain substantial benefits to its participants. They are modeled after all from military basic training camps, which have a long history of efficiency in turning the lives of its young cadets. It has been proven that military basic training camps builds camaraderie among the young cadets and the incorporation of the military model in teen boot camps could do the same among youths and foster respect for staff.

In 2001, researchers Angela R. Gover, Gaylene Styve Armstrong, Ojmarrh Mitchell and Doris Layton MacKenzie conducted a study comparing juvenile boot camps with traditional corrections facilities for juvenile offenders. The studys was supported by the National Institute of Justice, a component of the Office of Justice Programs,which also includes the Bureau of Justice Assistance, the Bureau of Justice Statistics, the Office of Juvenile Justice and Delinquency Prevention, and the Office for Victims of Crime.

Here are the findings of the research:

Control and structure in boot camps and traditional facilities

According to the researchers, participating youth who found success in a teen boot camp generally reported that the camp’s control and structure imprinted on them how to control themselves better. In a typical teen boot camp, participants are required to get up, shower, get dressed, study, work or play according to a predetermined daily schedule. This set schedule is followed daily and might have minor variations on some days; for example, instead of drill and ceremony, on Saturday afternoon there might be a community film showing.

Teens wore uniforms, practiced drill and ceremony, addressed superiors by title, entered facilities, like mess hall, in groups, and usually marched themselves to activities. The researchers noted that the highly structured and controlled daily schedule and regimented environment work favorably on teen boot camps; teens who have participated in a boot camp generally have favorable perceptions of their institutional environments. Furthermore, as what boot camp advocates argued, the military model incorporated into teen boot camps builds camaraderie among the participating youths and fosters respect for staff.

In addition, compared to traditional correctional facilities, researchers noted that the rigid structure and control of the programs and the staff foster a safe atmosphere in which the youths are less likely to fight each other or be mistreated by other youths.

Teen boot camps have a highly structured daily schedule filled with outdoor activities that teenagers are required to follow. The participants are usually grouped as units or platoons, and they enter facilities as a unit and remain with that unit for classes and group activities. Almost all of the activities are performed as a group and may need cooperation with each other in order to fulfill. These teamwork oriented activities, according to research, have substantial benefits to its participants. It teaches them teamwork and working as a unit, trust in others, and leadership—all important life skills that certainly has huge benefits. Group activities, especially the quality of military training, enable the participants of an achieving unit to reach a collective identity, or in a sense foster the highly valuable esprit de corps, which is particularly helpful in times of stress and adversity.

For individual benefits, along with the important life skills such as leadership and teamwork, the high impact activities also benefit its participants, not only boosting their physical attributes such as strength, endurance and stamina, but also builds their resilience and character, teaching them how to act and maintain control in the face of adversity.

Boot camps operate on an outcome focused philosophy. Quality management and performance based standards has always played a major role in the boot camp industry, and most boot camps focus more on outcome based decision making compared to traditional correctional institutions which operate on standards based on expert opinions about the “best practices”. It is with this perspective that boot camps shift away from the traditional methods of managing juveniles to methods that produces the outcomes desired.

For example, youth boot camps have been criticized by the level of strictness and the military based, confrontational model create excessive stress. However, what MacKenzie and her team of researchers found out that teens in boot camps generally reported favorable perceptions of their environment than teens in a traditional facility.  Juvenile boot camp operators also reported that their participants are given better care and more help compared to traditional juvenile corrections institutions. 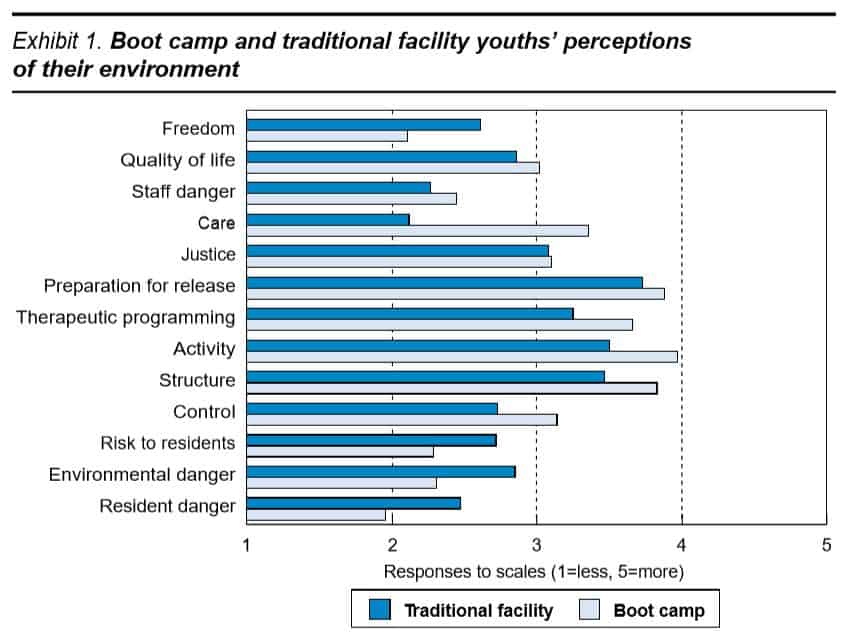 With regards to the subject of confrontational nature of boot camps, according to a youth trainer in About Face Youth Camp located in Connelly Springs, North Carolina, the whole point of in-your-face yelling is to motivate and encourage discipline among the campers, not demoralize or antagonize them. It is what they call unpleasant feedback, and instructors get into the face of cadets as a means to encourage kids to cooperate if they want the negative feedback to stop.

Even before, despite their popularity juvenile boot camps remain controversial to doctors and psychiatrists who wondered whether the highly confrontational nature of teen boot camps is appropriate for treating and managing troubled teenagers. Plus, there is the issue of the program’s ambiguous benefit once the teens are released from the program.

According to MacKenzie, who conducted a follow-up study for national review in 2007, boot camps do not offer adequate evidence supporting its efficacy in reducing recidivism of participating teens. According to her, boot camps appear to lack the necessary components of an effective long term therapy and three to six months treatment is too short to change a lifetime of bad behavior. As a result, it is not surprising that boot camps have not been effective in reducing recidivism. Aftercare programs are needed, and without a dedicated aftercare, teens will just fall back into their old habits. The lack of aftercare is one main reason why boot camps have such poor record on recidivism rates of its participating teens. 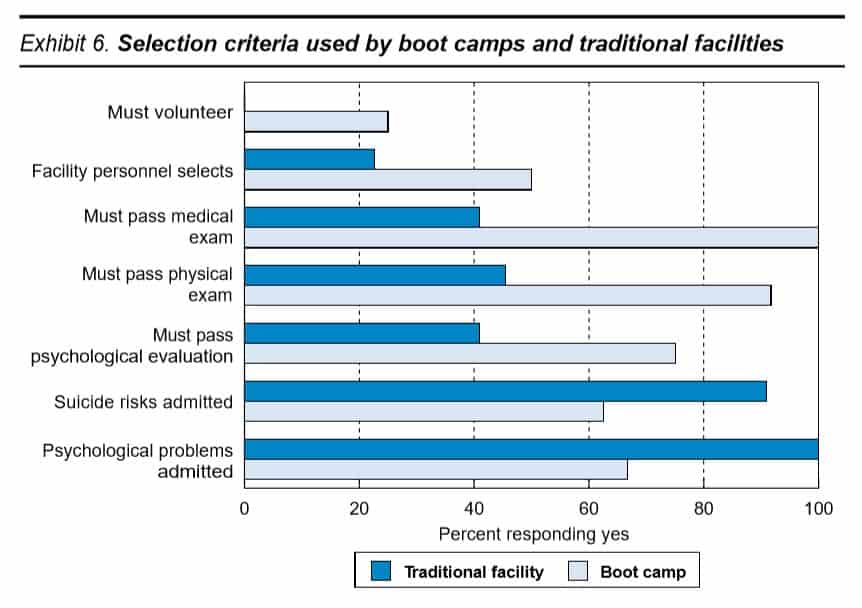 If you really feel that teen boot camps is what you child needs, you must fully understand of its pros and cons if used as an intervention. Participants must also understand what they are getting into, and they should have the physical and mental capability to handle the stress while in a teen boot camp. Already this will rule out troubled teenagers suffering from depression or anxiety as potential participants for a boot camp experience. That is why it is important to consult your doctor first. As being said, high impact training camps, like boot camps, are accident prone, and abuse prone.

Teen boot camps have obvious benefits, but its low recidivism rates and controversial nature makes it inappropriate to be used in an intervention setting. According to the U.S. National Institute of Justice, therapeutic boarding schools are best suited as intervention for troubled kids. This type of treatment model had consistently produced good results, and these schools employ better and proven methods such as cognitive behavior therapy in junction with known clinical treatment methods.