Are you a parent of a very troubled teen? If you see or suspect your teenager:

Your child may be at-risk more than you know. You need to act now before this behavior could get out of control. If you tarry too long the problems your teenager is having right now could get worse and it will negatively affect his or her future life.

If you are seeking for ways to help your troubled teenager, you are in the right place.

Teen boot camp is a one-stop online resource for anything you need to know about teen boot camps, teenage problems and the things you can do to counteract it. Browse our topics on troubled teens, common teenage problems, at-risk youth and featured programs, and become aware of the problems your son or daughter is facing.

What is a Teen Boot Camp? 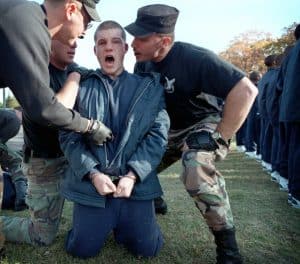 First day of Boot Camp at the Savage Leadership Challenge facility. James Phelps, 17, experiences Induction Day with the help of three Tactical Officers shortly after getting off the bus to boot camp. The TACS were making sure he understood the importance of using “Sir!” whenever he spoke. (Andre F. Chung/Baltimore Sun)

A camp program designed for troubled teens is usually short term and physically intense, whereas a residential program is generally used to help teenagers, over a longer period of time with a multi-faceted approach that may involve some boot camp style activities.

Actual boot-camps are partly modeled after U.S. Army recruitment training camps – As such it follows that similar military codes and rules (regulation, discipline and structure) are imitated in these type of programs. In some case, boot camps are also an offshoot to the state-run juvenile correctional systems in the United States. The only thing that set them apart from actual recruit training camps and U.S. juvenile systems is that teen boot camps are often short-term, for profit programs controlled by private institutions and is used primarily as a treatment for troubled teenagers.

As mentioned above, there are also other popular intervention programs aside from “boot camps” —there are therapeutic boarding schools, wilderness programs, and residential treatment programs designed to help a teenager in crisis but these programs differ vastly and there are number of important differences.

Click here to take our test to determine your teens need for placement.