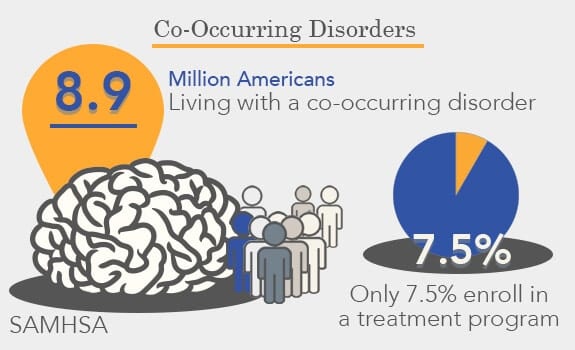 The term co-occurring disorder refers to the condition in which an individual has a co-existing mental illness and substance use disorder. While commonly used to refer to the combination of substance use and mental disorders, the term also refers to other combinations of disorders, such a mental disorder and an intellectual disability. (The terms dual disorder and dual diagnosis were previously used to describe the same condition.)

According to Psychology Today

What Is a Substance Use Disorder?

Alcohol or drug dependence, on the other hand, is typically diagnosed when the disorder has progressed and the patient can no longer control how or when he or she uses the drug of choice. Some patients may experience physiological dependence on a substance, causing heightened tolerance and withdrawal symptoms. The consequences of dependence can be quite dangerous. Severe alcohol dependence could even lead to death if the patient quits drinking abruptly and is not being carefully monitored by healthcare professionals in a controlled setting.

What Is a Mental Health Disorder?

There are many different mental health disorders that can affect someone’s mood, thinking, and behavior. One in five Americans experience a mental health condition every year. More than five percent of people in the United States live with a serious mental health disorder that affects their ability to interact with the world and perform everyday functions many of us take for granted.

Some of the most common mental health disorders that are associated with substance abuse disorder include mood and anxiety disorders. Patients with severe mental illness, like schizophrenia and bipolar disorder, are also often found to have a substance use disorder as well.

Co-occurring disorder is a very complicated illness because there are so many different variables that can affect functioning and disability. For example, a patient’s substance use disorder may be more severe than his or her mental health disorder or both may progress at the same pace. And because one can mask the symptoms of the other, it may take more time for a health care professional to accurately diagnose someone with co-occurring disorder.

Treatment for co-occurring disorder typically will involve an integrated treatment plan as both disorders must be treated at the same time. This is because the treatment of one will not automatically cause the other disorder to get better. For example, an untreated mental health disorder may increase the risk of relapse. Additionally, co-occurring disorder puts a patient at risk for a wide variety of other issues, so an integrated treatment plan developed by one team in one place will provide the best possible chance for a positive outcome.

Do You Need Help with Co-occurring Disorders?

If you are looking for a co-occurring disorder treatment center for a troubled teen in your life, the team at Turning Winds is ready to help. They are a residential treatment program that offers various therapeutic intervention strategies/techniques and programs to help treat the needs of troubled boys and girls. Students who come to Turning Winds struggle with many different disorders, including co-occurring disorders, but many leave with hope and a desire to rebuild their lives.